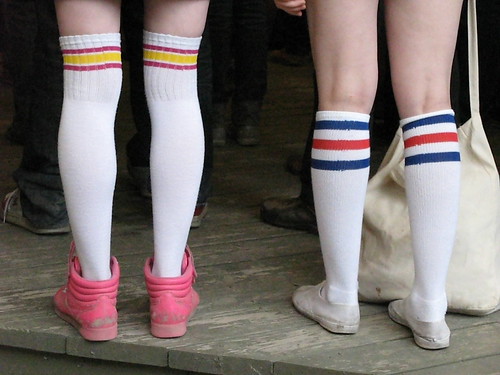 The last time I blogged I was looking as Mongrel2 as a potential replacement for Gunicorn.

The Goal is : being able to use Circus to manage independently each web worker - read my previous entry

It turns out that after some detailed benchmarks using Funkload and a classical web application that's doing some I/O, the Gunicorn stack was 20% faster than the Mongrel2 stack. I won't publish this benchmark, the important thing is just that for my app which processes requests really fast, on the same hardware, Mongrel2 was 20% slower.

That still makes Mongrel2 very appealing, because this overhead is almost unnoticed for many apps where most of the time is spent querying databases.

I suspect Gunicorn is faster because workers are receiving the request directly into the socket, then parse it once and go ahead and build the response.

In Mongrel2 case, the request is parsed then serialized in Json to go through the ZeroMQ socket, then unserialized by m2wsgi in the worker, then the response is sent back.

After more thoughts, and a tweet from Whit, I realized Mongrel2 was adding yet another indirection with its own potential issues. Sure it solves the issue I have, which is to be able to treat each web worker as an independent process in Circus, but the extra communication layer can be an extra worry. For instance, we currently have a lot of tweaking work going on so the ZMQ parts of our apps work smoothly.

There's one important property when you work with socket. And that property is used by Gunicorn, Unicorn, Apache, etc.: when you fork a process, the child can accept connection in a socket that was created and bound in the parent process.

In other words, if circusd -- the Circus process that runs all the processes -- creates a socket and starts listening to it, any child process will be able to accept new connections from it.

So if Circus itself manage sockets, it can send to its child processes one way or another the file descriptor number of the sockets it created.

It's easy from there to recreate a socket in the child process and work with. In Python that's done with the fromfd function:

In C or C++ it's even simpler since most socket operations are done directly with the FD value.

In Circus, managing sockets could be done really simply, by declaring new sections in the configuration file, that list the sockets it should bind on startup

An example where Circus would open a socket on port 8080 and another one on 8081, with a specific type:

Check out this issue for more details about adding this socket support in Circus.

Once Circus binds and listens to some sockets, we just need to spawn workers that get the file descriptor number and run a web server out of it.

I have started a prototype based on wsgiref that does exactly this: it's a WGSI server that can be run with a file descriptor instead of a host and port values.

Everything else is similar to wsgiref. The only issue I had was that everything in the standard library is making the assumption that when you want to create a server, you want to bind the socket.

I have found no server out there that was abstracting this enough for me to simply reuse it. All WSGI web servers out there can be launched against a host or a unix socket, not an existing file descriptor.

Follow-up After a few mail exchanges on WEB-SIG and with the maintainer of Meinheld, I am happy to say that both uWsgi and Meinheld now offer an option to run with an fd.

For example in uWsgi:

This should be part of their next release.

Anyways, chaussette can be run against a WSGI application the classical way, using --host and --port, or can be run using the --fd option. And the latter will only work if chaussette was launched as a child process and the parent has created the socket.

{SOCKET:web} would be in that case replaced by the real integer value of the bound socket.

Ohai! I have my Circus-based stack and I can manage each process separately !

Chaussette is based on wsgiref so is not going to perform that well. I have started another prototype based on Meinheld but I have to change the C code.

I have also done a prototype using Diesel, that works, but this project is a full framework, where I want a minimal worker process that just runs a WSGI app.

Maybe I should talk about the fd:XXX standard idea on WEB-SIG. It's easy to implement in every web server, and would make it possible for people to use any server they want, and take care of the process management themselves.